"A story always begins in the middle." So says Michael York at the Mormon Tabernacle Choir 2010 Christmas concert. His beginning statement in the narration of a touching story of the Welch immigrant who began the first "Tabernacle Choir" caught my attention. How true! There is always something before that influences our stories. For instance, we all have parents and grandparents and so on and so on. Their stories become our own. It's impossible to truly find the beginning. 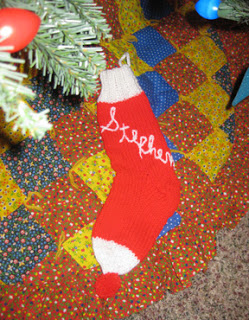 So I will begin my story of the Christmas stockings somewhere in the middle: the year I learned to knit a stocking--a Christmas stocking. I had my mother's pattern, and after several tries, I managed to produce one. The desire to knit a Christmas stocking came to me from my childhood. My mother knitted red and white rug yarn stockings for all of us. We were 10. They hung on the 3 sides of our fireplace that jutted out from the divider between our living room and kitchen (a unique design of our dad's). As we married and left home, my mother kept knitting. Every December there were new stockings--first for the in-laws and then for the new grandbabies that came along next. But our mother finished knitting before we finished marrying and producing grandchildren.

However, before our mother knitted the Christmas stockings, our grandmother knitted us stockings as a Christmas present. They shrunk when we washed them in the washer, but we still marveled that she could actually make such an item. I asked Grandma about it when I interviewed her for her history. "Oh yes," she said, "We knitted all our stockings when I was a girl. It didn't take that long."

How long? In her mother's history, my great-grandmother, it is said that she could start and finish one stocking in an evening. These were the long black knee socks all the girls wore at the time. So I thought I would try my hand at knitting Christmas stockings. After all, I keep having new grandchildren too. I made several one year. The next year I had forgotten how and had to make my previous mistakes all over again.

One year, my sister gave me her pattern for knitting stockings. She does the real thing for her grandchildren too. And advises that they be hand-washed to prevent shrinkage. After several false starts (one turned out so big I used it to wrap a big package), I knitted several that year. Fast forward a couple of years and what? More to knit and I forgot how again. The story continues, but this is the middle after all.
Posted by Joy Stubbs at 9:43 AM