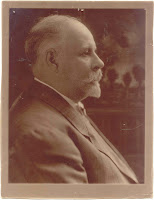 The GENEABLOGGERS theme for today brought to mind an ancestor that my mother-in-law and I had researched some years ago. His parents were and still are unknown. Samuel Wilson (pictured left) from Clinton, Iowa has a common name, but but an uncommon story. In an attempt to find his parentage and exact place of birth, we sent to the National Archives for his Civil War pension file, and we received a gold mine of information about him and his family that would fuel some very interesting family history writing (though not the information we were hoping for).

From the many pages provided by the National Archives (including death and marriage certificates) my mother-in-law and I read the following:

Declaration for Original Pension of an Invalid
State of Iowa, County of Clinton, On this 2nd of July A.D. 1872...
Samuel Wilson...declares he is the identical person who enlisted under the name of Samuel Wilson...at Davenport, Iowa on the 28th day of Sept, in the year 1864, as a private in Company E, in the 8th Regiment, Iowa Volunteer Infantry...discharged on the 24th day of May in the year 1865... [his description]...was in _____Hospital at Memphis Tennessee in February & March 1865. While in line of duty at Memphis Tennessee on or about 15th day of February 1865 was taken sick with diarrhea which became chronic and he is still suffering from the same and unable to perform manual labor by reason of the piles and his present physical condition very frail (emphasis added).

It gets worse--we also found his widow's claim and the affidavits which tell the story of his death. Here comes the madness part:

From his sons:
"That about the month of November 1892, my father who was drawing a pension for chronic diarrhea, we had to give him medicine and injections to operate on his bowels, for his diarrhea had stopped, and he had no passage from his bowels without medicine or injections, his head seemed to be affected, and he ___ hard to control, in fact he was insane from that time to his death. When he took medicine and had injections, the same would relieve his head for a short time, but he would soon become as insane as ever, it took three of us all the time to control him, at times he was very weak and feeble and when insane, seemed to have unnatural strength..."
[another son] "and he continued crazy until he was sent to an asylum, his condition was such that it was dangerous to keep him at home..."

From Cynthia Briggs, mother-in-law to Samuel's son Emery:
"Prior to his death, at the time I first became acquainted with him, he seemed to be suffering from chronic diarrhea, he had several bad spells each and every year and after each spell he became weaker, he was very feeble for two or three years before the month of November 1892, then about that time he had two or three hard spells, and his head seemed to be so affected, when he was deranged I visited him and found him still weaker, he had to be helped out of bed and in his chair, Doctor Lowell stated that the diarrhea stopping caused his head to be affected and he became decayed as he could get no action in his bowels, and that the reaction caused his diseased condition of mind, and I presumed caused his suicide by hanging [on 3 Aug 1893] (emphasis added)."

Now does that not make for an interesting, although very sad story? In response to her request for a widow's pension, Hannah Spade Wilson received $8 per month from August 1894 to April 1903 when it was raised to $12 per month until her death in 1911.

Since this file was received back in the pre-internet days, NARA has made family history research easier and internet friendly. When I looked on-line to share a link with you, I found an example of turning NARA research into a history as well as tips on how to find records and order them on-line. After revisiting Samuel's file, I have a few ideas to learn more about him. I have not yet written a history for Samuel Wilson since I would really like to know more about him first, but what I have received from this excellent source is golden.
Posted by Joy Stubbs at 6:59 AM